A predictive modelling tool was developed to assess patterns and relationships among the 10 serum biomarkers that best differentiated IBS patients from healthy controls and patients with non-IBS gastrointestinal disease. The value of this panel of biomarkers in the management of patients with IBS needs to be validated. These tools may help minimize unnecessary testing and diagnostic delays. As biomarkers are further studied and developed, they are likely to become an integral part of the diagnosis of IBS and reduce the potential for incorrect diagnosis and treatment delays.

Dotan stated that IBD are chronic intestinal disorders where, in genetically susceptible hosts, an intestinal microorganism triggers an over-reactive immune response. Antibodies against luminal antigens are specifically associated with CD.

The contribution of serologic markers, specifically the anti-glycan antibodies, to IBD diagnosis may be in differentiating IBD from other gastrointestinal diseases, and between CD and UC, in better classifying undetermined colitis and for decision-making prior to proctocolectmy in UC patients. Correlation between serologic markers and genetic variations may contribute to re-classifying IBD into new and more homogeneous subclasses.

Their significance in diagnosing populations at risk, such as unaffected relatives of IBD patients and CD patients prior to diagnosis, is under current investigation. Lettesjo et al examined if inflammatory markers could be detected in feces from patients with IBS and collagenous colitis CC , and elucidated if such analyses could be used as non-invasive tools to distinguish between these disorders. EPX levels were enhanced in feces from CC patients median 3. These findings suggested that fecal markers could be used as part of the clinical work-up to determine which patients should be biopsied and evaluated for CC.

A recent review by Navaneethan et al on laboratory tests for ilieal pouch-anal anastomosis noted the need for further studies validating the role of anti-CBIR1 as a laboratory marker to predict pouchitis, and concluding that serologic tests are primarily for research purposes. Booth et al noted that the evidence for testing TPMT enzymatic activity or genotype before starting therapy with thiopurine-based drugs is unclear.

These investigators examined the sensitivity and specificity of TPMT genotyping for TPMT enzymatic activity, reducing harm from thiopurine by pre-testing, and the association of thiopurine toxicity with TPMT status in adults and children with chronic inflammatory diseases. Two reviewers screened records and identified relevant studies in English. Data on patient characteristics, outcomes, and risk for bias were extracted by one reviewer and independently identified by another. A total of 54 observational studies and 1 randomized, controlled trial were included.

Insufficient evidence addressed the effectiveness of pre-testing. Genotyping sensitivity to identify patients with low and intermediate TPMT enzymatic activity ranged from Sparse data precluded estimation of genotype sensitivity to identify patients with low to absent enzymatic activity. Compared with non-carriers, heterozygous and homozygous genotypes were both associated with leukopenia OR, 4. Compared with intermediate or normal activity, low TPMT enzymatic activity was significantly associated with myelotoxicity and leukopenia.

The authors concluded that insufficient evidence addresses the effectiveness of TPMT pre-testing in patients with chronic inflammatory diseases -- insufficient evidence demonstrating that this strategy is effective in reducing harm or is superior to the established clinical standard of hematological monitoring. One of the references cited in the Prometheus website was a study on genetics of the ulcerative colitis by Thompson and Lees The authors concluded that "[t]hese advances will not in short term provide additional diagnostic or prognostic value.

There is also no reason necessarily why polymorphisms that contribute to disease susceptibility should predict disease course, and almost certainly have no bearing on treatment response and intolerance. Prospective studies are required to address the genetic contributions to these clinically important areas, and will become a major focus in the next few years". Adler et al noted that CD is often purely inflammatory at presentation, but most patients develop strictures and fistulae over time complicated disease.

Many studies have suggested that nucleotide-binding oligomerization domain 2 NOD2 mutations are associated with a varying but increased risk of complicated disease.

An accurate and sufficiently powerful predictor of complicated disease could justify the early use of biological therapy in high-risk individuals. These researchers performed a systematic review and meta-analysis to obtain accurate estimates of the predictive power of the identified mutations such as p. RW, P. GR, and p. LeufsX in NOD2 for the risk of complicated disease. Inclusion required specification of genetic mutations at the individual level and disease phenotypes by Vienna classification inflammatory B1 , stricturing B2 , and fistulizing B3.

The RR of surgery was 1. The predictive power associated with a single NOD2 mutation is weak. These data provide insufficient evidence to support top-down therapy based solely on single NOD2 mutations, but suggest that targeted early-intensive therapy for high-risk patients with two NOD2 mutations might be beneficial, if prospective trials can demonstrate changes in the natural history in this subset of patients. This difficulty complicates surgical options. The development of new technologies providing accurate diagnosis of IBD is needed.

Raman spectroscopy is a non-invasive method that uses the intrinsic properties of tissue and that tissue's vibrational energy in reaction to light. These investigators hypothesized that Raman spectroscopy can detect the structural and compositional changes that occur in the tissue during the development of IBD, and thus may offer increased diagnostic certainty in the differentiation between CD and UC.

For spectra collection, the probe was placed in gentle contact with the mucosa surface for 3 seconds, with excitation power at mW. Five spectra were acquired from each biopsy to increase the signal-to-noise ratio and to ensure repeatability of data collection. Mean spectra were analyzed for peak difference and molecular origin. Significant difference was observed between the spectra from each disease in the spectral regions assigned to nucleic acid, phenylalanine, and lipids.

Tissue samples from patients with UC demonstrated higher content of lipid and lower amount of phenylalanine and nucleic acid. These characteristic Raman features could serve as spectral markers that can potentially be applied to distinguish UC and CD. The authors concluded that this study presented the only application of Raman spectroscopy in the diagnosis of IBD.

The feasibility of this technique in differentially detecting molecular alterations in UC and CD has been demonstrated, indicating the potential to improve diagnostic accuracy of IBD. Wang et al noted that the gene encoding CD14 has been proposed as an IBD-susceptibility gene with its polymorphism CT being widely evaluated, yet with conflicting results. These researchers investigated the association between this polymorphism and IBD by conducting a meta-analysis. A total of 17 articles met the inclusion criteria, which included a total of 18 case-control studies, including 1, UC cases, 2, CD cases, and 4, controls.

However, there was negative association between this polymorphism and CD risk across all genetic models. Subgroup analyses by ethnicity suggested the risk-conferring profiles of T allele and TT genotype with UC in Asians, but not in Caucasians. There was a low probability of publication bias. The authors concluded that expanding previous results of individual studies, these findings demonstrated that CD14 gene CT polymorphism might be a promising candidate marker in susceptibility to UC, especially in Asians.

However, the results are inconsistent. A total number of 18 case-control studies including 17, subjects were identified. However, they noted that due to several limitations in the present study, well-designed epidemiological studies with large sample size among different ethnicities should be performed in the future.

Kovacs and associates stated that mannose-binding lectin MBL is a pattern-recognition molecule of the innate immune system and may be involved in the pathogenesis of IBD. These researchers evaluated the prevalence of MBL deficiency in a cohort of patients with pediatric-onset IBD and examined if it is associated with the clinical manifestations, serum antibody formation, or genetic factors.

This prospective study included pediatric patients mean age of Furthermore, 95 controls were investigated. Mitsuyama and colleagues stated that various non-invasive tests have been studied to screen for patients with CD, and were found to have limited accuracy and sensitivity, particularly in Asian populations. In a multi-center study using ELISA, serum ACP levels were determined in patients with CD, with UC, 98 with other intestinal diseases, with other inflammatory diseases, and healthy controls; and then examined for correlation to clinical variables.

Levels of ACP were significantly elevated in the CD patients, but not in the other groups that included UC, other intestinal diseases, other inflammatory diseases and the healthy controls. Among these other groups, ACP levels were not significantly different. The authors concluded that ACP, a newly proposed serologic marker, was significantly associated with CD and was highly diagnostic.

Moreover, they stated that further investigation is needed across multiple populations of patients and ethnic groups, and more importantly, in prospective studies to ascertain the clinical value of ACP. Adedokun et al analyzed data collected during the Active Ulcerative Colitis Trials ACT-1 and ACT-2 to assess relationships between serum concentrations of infliximab and outcomes of adults with moderate-to-severe UC.

These investigators compared serum concentrations of infliximab with outcomes of patients with moderately-to-severely active UC who participated in ACT-1 or ACT-2; efficacy data were collected at weeks 8, 30, and 54 for ACT-1 only. Relationships between serum concentration of infliximab and efficacy outcomes were assessed using trend, logistic regression, and receiver operating characteristic curve analyses.

They also evaluated factors that affected the relationship between exposure and response.

Infliximab therapy was effective for a smaller proportion of patients in the lowest quartile, and these patients had lower serum levels of albumin and a higher incidence of antibodies to infliximab than patients in other quartiles. The authors concluded that serum concentrations of infliximab are associated with efficacy in patients with moderate-to-severe UC; however, complex factors determine the relationship between exposure to this drug and response.

They stated that a prospective evaluation of the value of measuring serum concentrations of infliximab should be performed before these data can be included in patient management strategies. The OmpC is an outer membrane porin, E. Hamilton and colleagues stated that disease recurs frequently after CD resection; and the role of serological anti-microbial antibodies in predicting recurrence or as a marker of recurrence has not been well defined.

Quartile sum score range of 6 to 24 , logistic regression analysis, and correlation with phenotype, smoking status and endoscopic outcome were assessed. 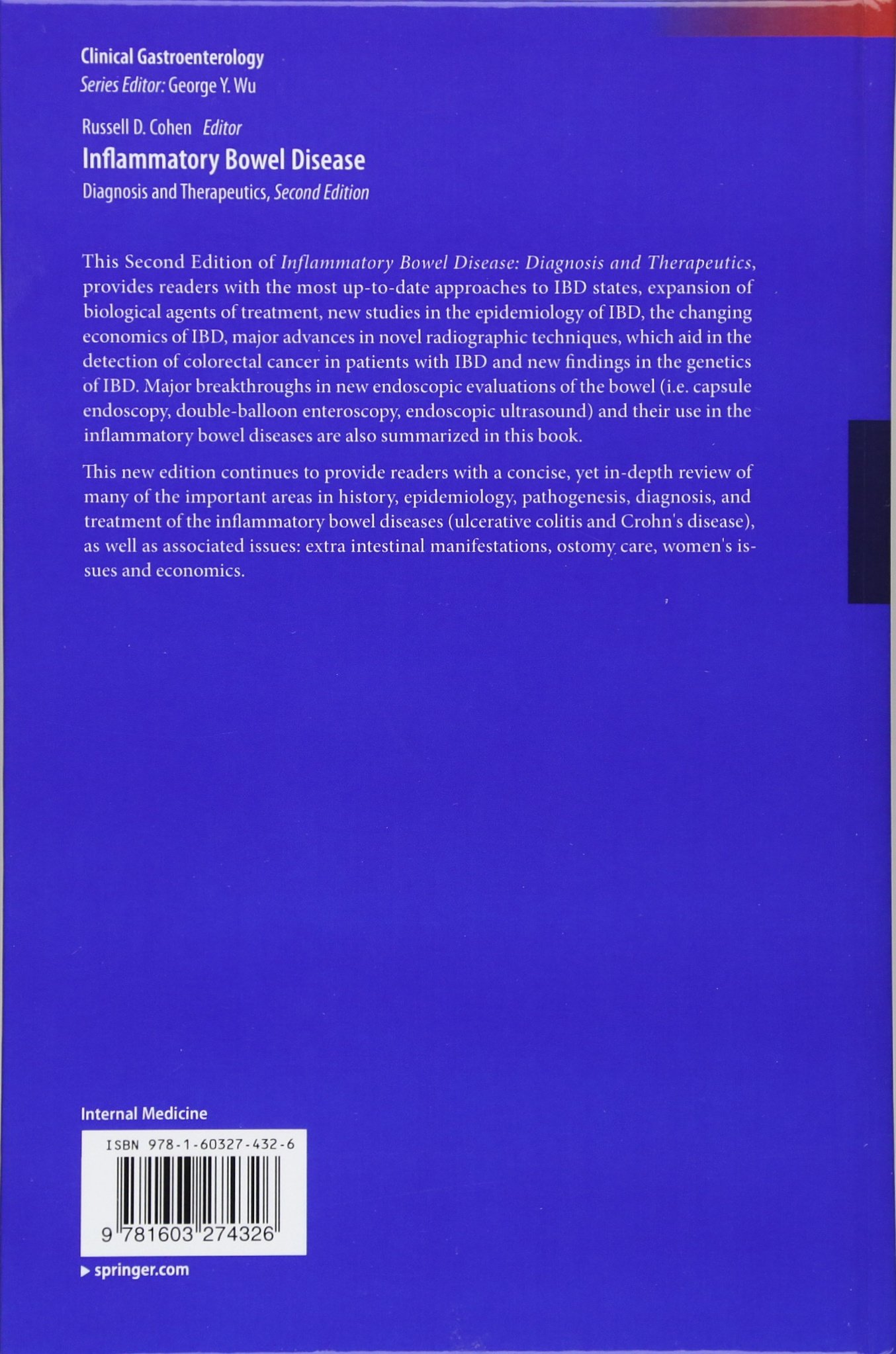 The authors concluded that anti-Fla-X and presence of all anti-bacterial antibodies identified patients at higher risk of early post-operative CD recurrence. They stated that serologic screening pre-operatively may help identify patients at increased risk of recurrence. These preliminary findings need to be validated by well-designed studies. Yarur and co-workers noted that serum amyloid A SAA is an acute-phase protein, but its role as a biomarker of disease activity in CD is unclear.

These researchers evaluated the correlation between SAA, inflammatory cytokines, and mucosal inflammation in patients with CD and examined if this marker might be useful in patients who do not have elevated CRP levels despite having active disease.